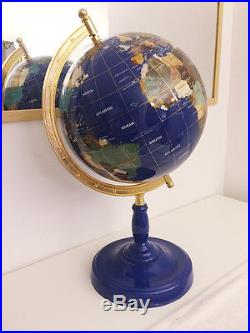 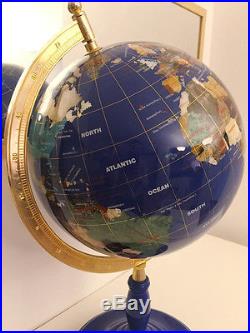 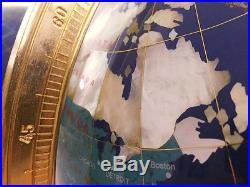 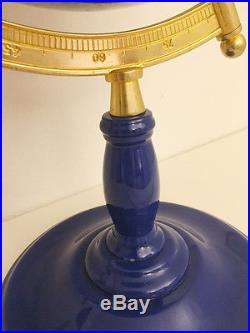 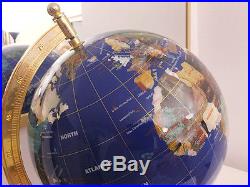 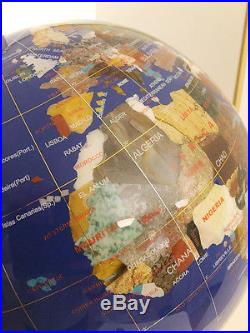 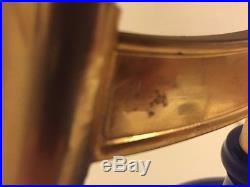 This is an exceptional World Globe made from Minerals & Gemstones. Globe measures 21 1/4 inches tall including stand. Measures approximately 13″D, with a base diameter of 8 1/2″. Hand crafted by the finest artisans from real semi-precious gemstones and includes stand. Each country and continent is hand carved and set, requiring hundreds of hours of precision work. Includes over 25 distinct grade A gemstones are used for the oceans, continents and countries of the world. A partial list of minerals and gemstones used include. Abalone shell or Mother of Pearl – Iridescent mother-of-pearl shell lining. Abalone is the popular name in the United States for a univalve gastropod mollusk of the genus Haliotis. Amethyst or Purple Quartz – A variety of quartz , violet to purple in color, used as a gem. It is the most highly valued of the semiprecious quartzes. Brazil, Uruguay, Sri Lanka, Siberia, and parts of North America are important sources of supply. Aphrizite – A black variety of Tourmaline. Tourmaline is a complex borosilicate mineral with varying amounts of aluminum, iron, magnesium, sodium, lithium, potassium, and sometimes other elements, used as a gem. Sources of the gem include Elba, Madagascar, Myanmar, Sri Lanka, the Urals, Siberia, Brazil, and Maine, Connecticut, and California in the United States. Banded Agate – A translucent, cryptocrystalline variety of quartz and a sub-variety of chalcedony. The colorful, banded rocks are used as a semiprecious gemstone. Important sources of agate are Brazil, Uruguay, and the United States (Oregon, Washington, and around Lake Superior). Belioculas Onyx – A variety of black cryptocrystalline quartz , differing from agate only in that the bands of which it is composed are parallel and regular. Black Spotted Jade – A microcrystalline gem variety of jadeite or nephrite (actinolite) with a toughness (resistance to breakage) exceeded only by that of carbonado diamond; ranges from nearly white to emerald-green; the black, spotted variety existing somewhere in between. Chrysolithos – Also known as peridot and chrysolite from the ancients “chrysolithos”, meaning “golden stone”. It has an oily look which looks something like olive oil. Peridot has been mined on St. John’s Island (known in Arabic as Zibergit) for more than 3000 years. Peridot may be from the Arabic, “faridat” which means gem. Conch Pearl – Similar in color to pink coral, these pearls are produced by a conch, which is a saltwater mollusk from tropical waters. Coral – Coral is calcium carbonate with a trade of carotene. Its color ranges from white to red. It grows in branches that look like underwater trees. Most coral is found in the Mediterranean Sea or in the Pacific off Japan and Taiwan. Green Jade – A microcrystalline gem variety of jadeite or nephrite (actinolite) with a toughness (resistance to breakage) exceeded only by that of carbonado diamond; ranges from nearly white to emerald-green. Green Jasper – Jasper is an opaque variety of Chalcedony occurring in all colors. It is sometimes impure, containing organic material and iron oxides. Green Jasper is of a light to dark green color. Lapis Lazuli or Lapis – Lapis may contain other minerals, such as calcite, pyrite, amphibole, apatite, diopside, feldspar, sphene, and zircon. The name comes from Arabic “allazward” meaning sky or blue. At one time it was valued on an equal level, in weight, with gold. The best lapis comes from Afghanistan and Chile. Major sources are at Badakhshan in Afghanistan, Lake Baikal in the USSR, and Ovalle in Chile. Lapis Siphnos is Lapis from the Greek isle of Siphnos. Meerschaum – A fine, compact, usually white claylike mineral of hydrous magnesium silicate, H4Mg2Si3O10, found in the Mediterranean area and used in fashioning tobacco pipes and as a building stone. Mongolian Spotted Jade, and many more.. Extremely heavy and substantial, weighing in excess of 17 lbs. An heirloom quality globe to last for generations to come! Message me any questions. The item “Semi-precious stones World Globe with Lapis” is in sale since Wednesday, December 5, 2018. This item is in the category “Antiques\Maps, Atlases & Globes\World & Celestial Globes”. The seller is “fielsfriend” and is located in CO. This item can be shipped worldwide.